Vegan Junk Food Bar
According to our food critc, the Vegan Junk Food Bar is the place to be if you're looking for some greasy 'plant based' comfort food. In fact: the burgers here are better than the ones at many chains that dó serve meat. Also try the seaweed nuggets and vegan 'bitterballen', a typical Dutch snack that keeps locals coming back for more.
Two restaurants: Staringplein 22 and Marie Heinekenplein 9-10

The Dutch Weed Burger Joint
Ah, the Dutch and their puns. This is no coffee shop and although everything revolves around (sea)weed, you won't find actual narcotics here. Vegan foodies: gorge yourself on 'double weed Burgers', 'Seawharma' (a vegan take on shoarma) and 'Weed Dogs'.
Are you a sweet tooth? Try the funky galaxy doughnut. Also for take out.
Nicolaas Beetsstraat 47

Koffie ende Koeck
This place is known for their 'Rokerighe Rakker', a smokey sandwich with almond/sesame tofu, garlic mayo, carrot and pickled radish. But if you're looking for a sugar rush this is the right place for you too. The vegan high tea comes with finger sandwiches, scones, cakes en unlimited tea.
Haarlemmerweg 175

Dophert
Dophert is a bright and colourful lunchroom (closed on tuesdays) that serves croissants with vegan butter, scrambled tofu, salads, sandwiches en Dutch (vegan) bitterballs. On thursdays, fridays and saturdays Dophert is open for a threecourse meal or a 'Dophertburger'.
Spaarndammerstraat 49 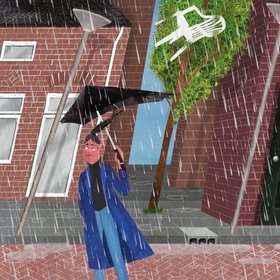