The EMA’s headquarters is quite possibly the most boring skyscraper in the entire Zuidas business district. This is not surprising, since it’s surrounded by architectural flamboyance, and was designed and built in record time for pharmaceuticals experts leaving London as a result of Brexit. The complex was completed from scratch in less than two years.

The 1,300 staff have been temporarily housed in a vacant building in Sloterdijk, and are now relocating to Domenico Scarlattilaan in the eastern part of the Zuidas. The big new building is the work of the Central Government Real Estate Agency (and architect Fokke van Dijk, who did the provisional design), and the Bouwcombinatie EMA consortium. To keep it simple, they decided not to include an underground car park – staff will get to work by bike or public transport.

Scarlattilaan is a nothing street, and the small area of greenery outside the EMA building is lost in an ocean of concrete. The KPN mast and headquarters opposite are dead, windowless blocks. Fortunately, in 2017, when Brussels decided to locate the building here, it saw only the provisional design and not the desolate surroundings, otherwise things might have turned out differently.

The building has a powder-coated aluminium façade in a bronze colour that looks sombre on a grey day. But when the sun comes out it’s transformed, and the recessed windows with deep surrounds create a playful and reflective look. A chameleon has come to the eastern part of the Zuidas.

This office block, complete with meeting rooms, an auditorium, and a restaurant, is where pharmacists evaluate the safety and effectiveness of drugs used throughout Europe.

Pharmaceutical company representatives wait in the semipublic section on the first three levels, and there are another eighteen floors of offices above this. They will have the privilege of enjoying the most spectacular office atrium to have been built for many a day: a patterned vertical garden almost sixty metres high, designed by Okra Landschapsarchitecten and paraphrasing a composition by British artist Bridget Riley. Water is fed along horizontal metal gutters. The spotlights in the atrium will help the plants to grow and flower – and they’re clearly working, because the plants have already been pruned once.

No fighting for desks

This wealth of greenery has helped the building to achieve a high BREEAM sustainability score, which takes every aspect of its environmental impact into account, including its use of materials, energy consumption, and accessibility. This is great for employees, though casual visitors will see little of this apart from the waterfall and plants.

Staff will have their own lounge bar on the eighteenth floor, and a roof garden halfway up the building, both perhaps compensating for the surroundings, where there is not a café or a bustling street in sight. So does the interior design, by Fokkema, with its oak accents, lounge seats, adjustable desks, and armchairs. This warmth and simplicity contrasts to the EMA’s old office in London’s Canary Wharf, with its acres of marble in the entrance and deep-pile carpet on each floor.

The interior does its best to make employees feel at home by allocating workspaces rather than making them fight for one each day. They do a very important job, and the architecture reflects this, but avoids being narcissistic or egotistical. The more you think about it, the more you realise that it’s nice to have something unassuming in the Zuidas, as a counterweight to the look-at-me buildings all around it. 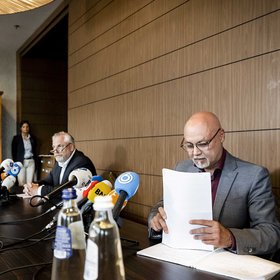 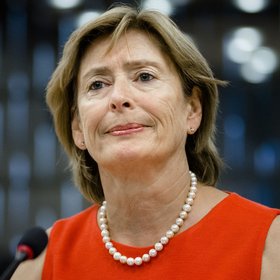 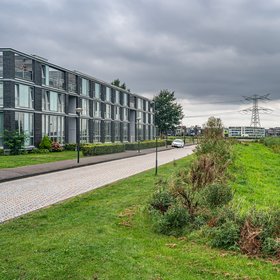