The city’s role in slavery was large scale, global, long term, continued long after slavery was officially abolished, and took different forms. It played a systematic and organised part in the trade, and councillors were also actively involved as individuals, says Pepijn Brandon, who is researching the subject for the International Institute of Social History.

Amsterdam used slaves in its colonies in Suriname, Curaçao, and Indonesia, and also in South Africa, Taiwan, Brazil, and North America. In the latter, this involved not only Nieuw-Amsterdam, now New York, but also the colony of Nieuwer-Amstel on the Delaware river, which was governed by Amsterdam.

“The involvement was more widespread than we first thought,” Brandon says. “Amsterdam traded with the world, and its contribution was equally global.” He is one of four editors of a book entitled De slavernij in Oost en West, copies of which were given last week to mayor Femke Halsema and deputy mayor Rutger Groot Wassink. More than forty researchers contributed to the publication.

The research, commissioned by the Mayor and Executive Board, could be the basis of an apology for its involvement in this dark chapter of history. The council has passed a motion calling for an apology, which would be the first issued by a Dutch city.

Groot Wassink wanted to examine exactly what Amsterdam should apologise for, and determine the role of the city, rather than individuals, in slavery. It took part in various ways, one of them being the Sociëteit van Suriname, of which it was one of three owners. The organisation managed Suriname from 1683 to 1795, transporting thousands of men, women, and children there from Africa. Council minutes show that the city’s mayors knew about this.

The second route was indirect. Amsterdam’s administrators had the biggest say in the management of the United East India Company, whose trade in Asia also included forcible migrations, slavery and forced labour, with the city’s express support. The same was true of the West India Company, which transported slaves to Suriname, Curaçao, and elsewhere. “Amsterdam supported this aggressive policy,” Brandon says.

A number of mayors themselves were involved in slave trading, taking advantage of their office where necessary, and the city council also played an important role in justifying slavery.

This history stands in stark contrast to the city’s much-vaunted reputation for tolerance, dating back to the “Golden Age” when many refugees found shelter here. Can a city be tolerant and practice slavery at the same time? “Yes, and that’s what makes history so complex,” Brandon says. “Slavery is as much a part of the city’s history as tolerance.”

Whether the research will lead to an apology is a political decision that will have to be made sooner or later. The researchers hope that the city will commission more work on slavery, and look at whether present-day racism is a continuation of it.

- Between the sixteenth and nineteenth centuries, Dutch ships carried an estimated 600,000 slaves from Africa to South America and the Caribbean.

- Amsterdam’s administrators played an important role in the United East India Company, the West India Company, and the Sociëteit van Suriname. They also lobbied on behalf of plantation and slave owners.

- As a trading centre, Amsterdam profited from slavery. Shipbuilding flourished as a result, and so did businesses that processed commodities from plantations such as sugar, tobacco, and coffee. Amsterdam merchants also supplied the plantations. 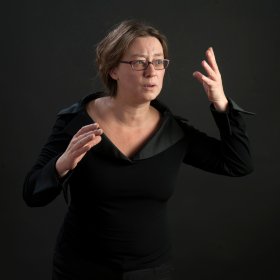